Since applying the Feedback Loop of regular briefing and debriefing with his case teams, Nick noticed constant improvement from his people. They were flying in formation: the associates and consultants were working more effectively and productively, and he found that he was much better aligned with his managers. Best of all, his clients appeared to be more satisfied than ever with the work his teams were producing. Nick had become the go-to partner for young talent looking for ways to improve, and found himself mentoring many of the firm’s rising stars. Overall, Nick was extremely satisfied with his practice, and as his methods as a leader continued to develop, he discovered an unintended consequence that benefited him even more.

In the process of cultivating a culture of debrief that promoted honest feedback without fear of reputational risk, Nick found that his team was gradually gaining the confidence to critique his own techniques. While Nick had relied heavily on mentors early in his career to guide him in his ascent to partner, now that he was at the top of the food chain he realized that he rarely received feedback any more. Though he didn’t believe he had stagnated in the past five years as a partner, he did realize how easy it had become to accept the nods, smiles and compliments of his junior people as affirmation that he was “handsome, intelligent, and the perfect leader.” But once he began to implement a system of regular debriefs after key meetings and events, he felt that he had a whole new team who were mentoring him back in ways he had never thought possible. His young managers, consultants, and associates with their fresher perspectives, were often noticing things about Nick’s performance he never would have caught himself. Hearing what they had to say, he felt like he hadn’t received such honest feedback since the day he made partner, and realized that even after decades in the business there was still room for him to improve.

One example of this bottom-up feedback resonated especially strongly with Nick. His manager and he were debriefing after another big Dell meeting, which both felt hadn’t flowed as smoothly as it could have. His manager agreed, and expressed his opinion:

“Nick, obviously we’re both very knowledgeable about our goals and objectives. But a few times, I felt that when I was trying to explain a concept to Michael Dell, you were too quick to jump in and rephrase my words. I heard you say multiple times today, ‘What my manager really means to say is…,’and it felt like you were undermining me and making us look weak as a team. Michael knows you’re the partner, but it’s my job as the manager to run point in meetings, and I think our message would be stronger if you gave me a little more room to do so.” 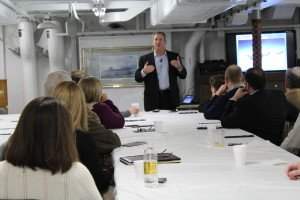 Nick had never heard a subordinate talk to him like this before, but in reflection he realized his manager was right – the two had previously agreed that the manager had more hands-on experience with the work and that it was best for him to explain it. Furthermore, they’d spent months developing effective presentation tactics, and he needed to have faith in those. He clearly recognized that for the good of their business, he had to trust his team more. He resolved to stop stepping on his manager’s toes and decided that if he felt his manager was being unclear, he himself would try harder to get the manager prepared in the pre-meeting briefing.

Before their next meeting, Nick made sure to emphasize roles and responsibilities during their pre-meeting briefing, and he repeatedly asked his manager questions to make sure they were aligned in their message to the client. Once they were in the meeting, he worked hard to honor their contract and only jumped in when his manager signaled him to do so. While it initially was difficult to give up the tactical lead, his manager was clear and effective and their meeting went off without a single hitch. In fact, Nick found that his manager often knew details about their work that Nick himself did not. His ultimate confirmation came when a top Dell executive pulled him aside to share his appreciation for the depth of the manager’s knowledge, saying that “your team is so good, I can’t tell the difference between them and my own people.”

As a result of direct feedback from his manager, Nick had modified his behavior to become a better leader. He learned that he could be as effective leading from the rear as he had been always trying to lead from the front. Most importantly, he and his manager both came off looking better than ever, and his client was extremely pleased with the results. Nick clearly wasn’t too old or too senior to continue his growth as a leader, he simply needed to look for mentorship in new places; and debriefing with his team provided him the feedback he needed to continue his professional journey.

Nick now makes it a point during every debrief to ask his team what he himself could have done better, and after every meeting he finds new areas for improvement both big and small. As a partner, he is delighted that this new tool they call “debrief” is accelerating the experience of his people, driving better results for his clients and ultimately making him a better leader.