Female fighter pilots are in high demand as speakers, and it’s easy to understand why; they offer inspiring stories both about their military service but also about breaking barriers and doing things that traditionally were unheard of for females.  My father flew A-4 Skyhawks in the US Navy during the 1950’s when there were no female fighter pilots.  This policy was based partly on a flawed theory that female pilots couldn’t handle the G-Forces of aerial combat, but also on a belief that if women were captured as POW’s that their captors could torture the female prisoners as a way to get their male prisoners to confess and share military secrets.

Today, these norms have all changed and women can regularly be found in the ready rooms of fighter squadrons around the world.  There is no doubt that they are highly capable as pilots, leaders, wingmen and squadron mates.
My sister is a 777 Pilot with United Airlines and over the years I’ve either worked with or interacted with a number of female fighter pilot speakers, and have enjoyed hearing some of them speak.  Some of the more popular ones are listed here.

Amy is an experienced F-16 Pilot and USAFA Graduate.
https://afterburner.com/amy-sable-lewis/

Michelle is an MC-12 and T-53 Pilot who also teaches at the USAFA.
https://afterburner.com/michelle-sonic-ruehl/

Robin is an F-16C Pilot and USAFA Graduate with a B.S. in Astronautical Engineering.
https://afterburner.com/robin-foxc-witt/

Jen is a USAF F-16 Pilot and Founder of her own business.
https://afterburner.com/jen-steel-wade/

Jackie O is an F-16 pilot, USAFA Gymnast and keynote speaker superstar.  I have had the pleasure of working with her for many years and have the greatest respect for her as a pilot and a leader.

Carey Lohrenz is widely known as the first female F-14 Tomcat pilot.  In her book “Fearless Leadership” she offers a lot of insights on teamwork and execution; it’s well worth the read. 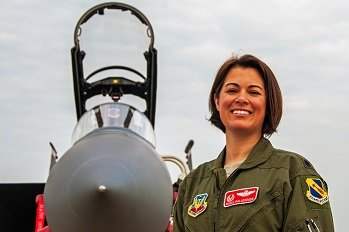 Nichole Malachowski is known as the first female Thunderbird pilot.

Shannon is one of the first women to fly the Apache attack helicopter in the U.S. Army.

Amelia is one of the first women to fly solo around the world.  She accomplished this daring flight in a Single Engine Pilatus PC-12

Any of the pilot speakers listed here can provide you with an insightful and memorable keynote.  If you’re looking to motivate your team and give them some exciting real world anecdotes that relate directly to teamwork and business insights, you really should consider booking one.

If you’re looking for a fighter pilot keynote speaker for your next meeting or event, we hope you’ll also consider Anthony “AB” Bourke a former USAF F-16 Pilot and proven business leader as great solution to inspire and motivate your group. For more details click here:

The appearance of U.S. Department of Defense (DoD) visual information does not imply or constitute DoD endorsement.